I made this stew while studying, which is sort of like being intoxicated; you can’t react appropriately in social situations, there is a complete loss of time, sometimes you’re needy and love everyone, you’re absent minded. Also, crucially, you need comfort food that is really easy.

It’s called Drunken Lamb Stew because it’s easy enough to make if you were studying, or you’ve enjoyed a drink or two, it would be awesome after coming home late (from studying, of course) and to top it off it has a bottle of beer in it to make it extra delicious.

The stew lacks the a bit of finesse, pretty chunky and all thrown into the pot, but it has a beautiful, rich flavour anyway.

The principle of the stew is as you chop one ingredient, the previous one is in the pot starting to cook and because everything is just roughly chopped you don’t need to prep before you start cooking.

Start by chopping each of your onions in half and then each half into about 8 chunky pieces. Throw them in the pot with the oil, set your temperature so it’s hot enough than they start to cook but they won’t burn if you don’t stir for a minute or two.

Once your onion is in the pot, dice your lamb and throw it in, stir so the underside of the lamb will brown, but don’t worry about evenly browning it. The stout will make up for the flavour that you would usually get from browning the meat all over.

Keep working through the ingredients like this, throw something in, stir, then find the next ingredient on the list. 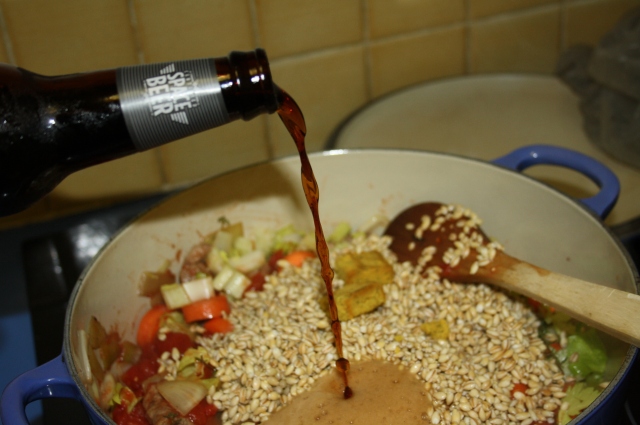 Before letting it stew (either all day in a slow cooker, or on the stove for a good hour), make sure that there is enough liquid to just cover the ingredients.

Uncover the stew for the last 20 minutes to help the liquid evaporate. 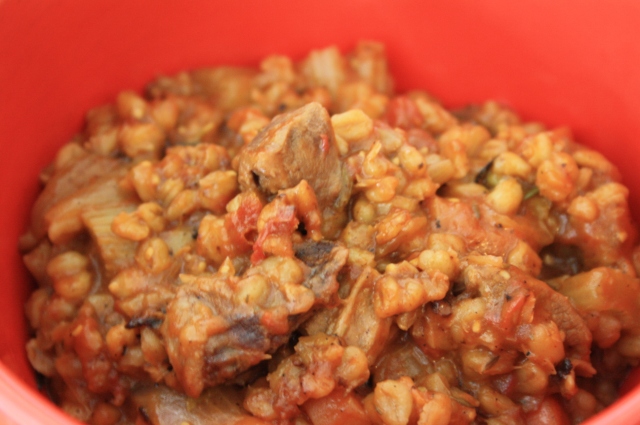 The stew was great, the barley absorbs all the flavours and the meat was still in hearty chunks but was tender once you bite into it. Of course it goes really well with a bottle of the stout you used in the stew.