The smell of fresh bread is out of this world! Possibly the only thing that is better is eating it with good fresh tomatoes and hummus next to your favourite person.

My new mantra is “it can’t be hard – they’ve been doing it for thousands of years without a modern kitchen.” This applies to bread, yoghurt, cheese and any other foods that have been part of our diets for millennia.

I would recommend that everyone makes fresh bread occasionally because it is just so much more delicious that store bought, and if you’re not keen on kneading and rising, try a no-knead recipe (to be posted soon), but this is really pretty easy.

This is probably not a particularly authentic pita bread recipe, but it makes a beautiful pita with a pocket to stuff with tasty non-authentic hummus. So give it a go! 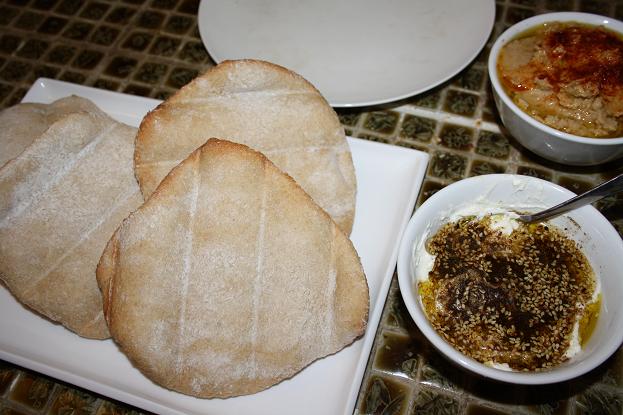 What an excellent lunch

Mix the sugar or honey into the warm water, then sprinkle the yeast on top. Leave it aside for 5 minutes.

Place the flour and salt in a bowl, then mix in the yeast mixture and olive oil. Once it comes together transfer to a floured surface to knead for 5 minutes until smooth and elastic.

Leave to rise while you make hummus

Place the dough in a bowl covered with a damp tea towel, let it rest in a warm spot (perhaps near that scalding oven) for about 30 to 45 minutes while the dough rises. The dough should double in size, but often I’m impatient and don’t let it get quite that big and it still works.

Divide the dough into 4 equal portions and roll out until about 4mm thick. Let the rolled dough rest for about 5 minutes to rise a little. Make sure there is a light coating of flour on the dough so it doesn’t stick during cooking. 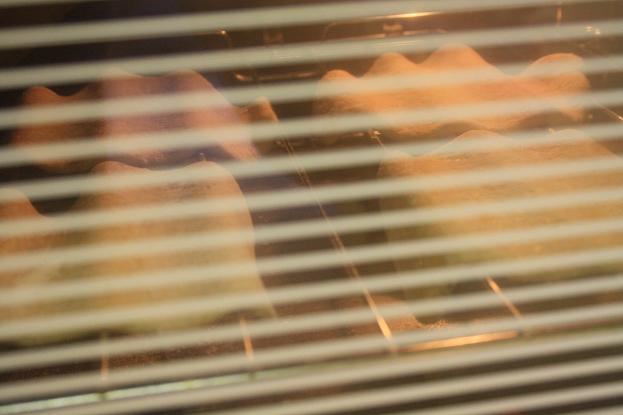 Put the dough straight onto the rack in the oven, or onto the grill on the barbeque. Cook for about 3 minutes on the first side, then flip to cook for another 2 on the other side. Try to keep as much heat in the oven as possible. The should puff up and be a bit golden when they’re ready. 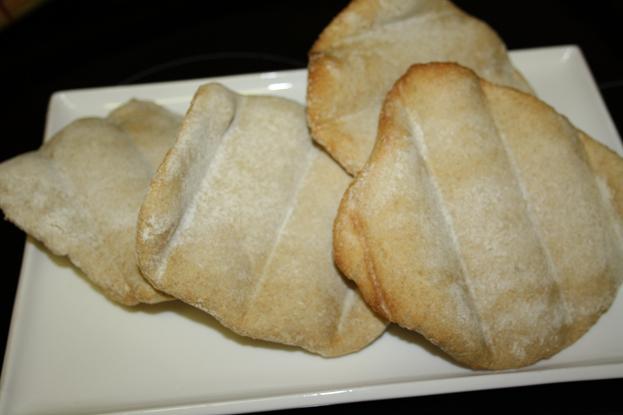 Serve with your favourite fillings, I had hummus, labneh with za’atar and tomatoes.

This entry was posted in Frugal Foods, Healthy and Tasty, Vegan and Delicious, Vegetarian, Yeasty goods and tagged Flour, Yeast. Bookmark the permalink.